SHOPPING WITH DEBBIE McGEE (Views from the Abbey 11)

Posted by jimandjuliabinney on February 4, 2020 in Uncategorized 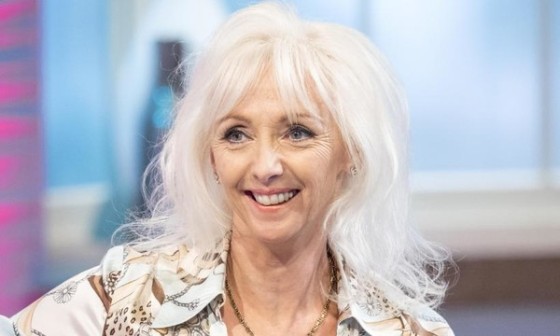 Last Sunday I went shopping with Debbie McGee, the real live English television, radio and stage performer who is best known as the assistant and widow of magician Paul Daniels and was a finalist in BBC’s 2017 Strictly Come Dancing. We met in the town centre after I had been to church and Debbie had finished her Sunday morning show for BBC Radio Berkshire. Well, actually this is a slight exaggeration on my part. True, I was in Reading town centre after church – I had to collect some medication from Boots the Chemist – and I found myself standing next to Debbie in the queue. I actually didn’t speak to her – I think that it is difficult enough for well-known TV personalities to be out and about trying to get on with trying to live an ordinary life without the hoi polloi looking at them, talking to them, or pestering them for autographs or selfies. But … technically I was shopping with Debbie McGee.

Thinking about this later, and reflecting on my time in church earlier that day, I found myself wondering how many people’s relationship with Jesus is like mine with Debbie McGee? I’m not just thinking of Abbey folk, or people in Reading per se, but everyone anywhere. I once wrote an article entitled: ‘Don’t Just Do Something, Stand There!’ in which I implied that our tendency to ‘busyness’ (particularly the Protestant work ethic ethos) could actually be a barrier to having an intimate personal relationship with Jesus Christ. I wasn’t suggesting that ‘good works’ were not important for us to do, simply that they were meant to be the fruit of a living relationship with God in Jesus and not a means to finding such a relationship (as the Apostle Paul makes clear in Ephesians 2:8-10). On lady was so incensed at what I had written she really laid into me: ‘I want you to know’ she said, ‘that my whole Christian life is based on doing good works!’  And, of course it was true of this particular lady! She was an activist. She was on the go all the time doing this and that to help others (whether they needed help or not). There was little I could say to defend myself or my opinion. Interestingly enough, however, a short time later her circumstances changed which meant that she had to give up virtually all of her many activities. A few months later she came to see me and apologised for her initial reaction to what I had written. ‘You were right and I was wrong!’ she confessed. ‘When I actually stopped doing all the things I was doing’ she told me, ‘I suddenly realised that I actually didn’t have an intimate relationship with Jesus … in fact I didn’t really know him at all!’ That marked a turning point in her life. Later still her circumstances changed  and she was able to pick up various activities once again. This time, however, they didn’t get in the way of her newfound intimate relationship with Jesus. She made sure that they were ‘those good works God had prepared beforehand for her to do’ (Ephesians 2:10) and not just any kind of good works born of activism.

I wonder how many people profess faith in God, or ‘go to church’, or use all the right religious language, etc., etc. but whose actually relationship with Jesus Christ is rather like mine with Debbie McGee? I knew who she was, I actually stood right next to her, but I didn’t speak to her, I didn’t communicate with her in any way, I couldn’t call her my friend, I don’t have any kind of close relationship with her? Over the years I have noticed that there a lot of people (including professing Christians) who talk about ‘religion’ or ‘church’ but who never talk about Jesus? When I have asked them to tell me something about their own ‘faith journey’ they will talk about ‘church’ but rarely about ‘Jesus’ as someone they know personally or intimately. Eadie was a lady in my first church. She had been a church member for 40 years but had never ever come to know Jesus in a personal way. She came to see me after church one Sunday and confessed as much. We prayed together and she made a personal commitment of her life to Jesus Christ, asking him to become her Saviour and Lord and take over her life. A few months later she was baptised by full immersion and told her story to the whole church. Over the years I have seen a number of ‘Eadie’s’ swap belief in ‘church’ for faith in ‘Christ’!

This Sunday is my 29th wedding anniversary. I know Julia intimately and love her more with each passing day. NB. Readers worried about me meeting Debbie McGee in Boots will be pleased to know that Julia was also with me at the time (along with several hundred other people). God doesn’t want us to be ‘religious’, or just ‘churchy’ (although active membership of a lively, active, God-honouring church is to be commended), he wants us to have a daily, close, intimate relationship with his Son.  This, of course, is one of the essential points that Jesus himself makes in his ‘Parable of the Vine and the Branches’. This is what he said: ‘Live in me. Make your home in me just as I do in you. In the same way that a branch can’t bear grapes by itself but only by being joined to the vine, you can’t bear fruit unless you are joined with me. I am the Vine; you are the branches. When you’re joined with me and I with you, the relation intimate and organic, the harvest is sure to be abundant. Separated, you can’t produce a thing. Anyone who separates from me is deadwood, gathered up and thrown on the bonfire. But if you make yourselves at home with me and my words are at home in you, you can be sure that whatever you ask will be listened to and acted upon. This is how my Father shows who he is—when you produce grapes, when you mature as my disciples. I’ve loved you the way my Father has loved me. Make yourselves at home in my love. If you keep my commands, you’ll remain intimately at home in my love. That’s what I’ve done—kept my Father’s commands and made myself at home in his love’ (John 15:4-10 The Message).