Posted by jimandjuliabinney on October 26, 2018 in Uncategorized 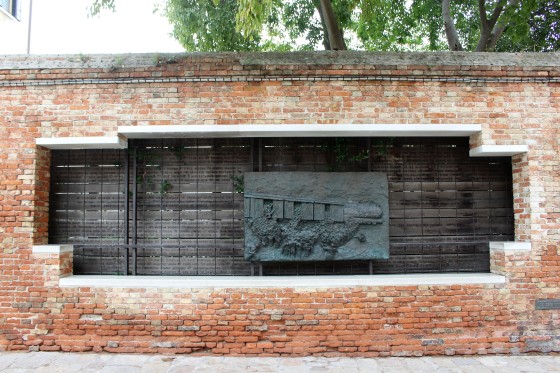 One of the advantages of having an apartment in the Cannaregio area of Venice is that it gives us the opportunity to explore bits of this magical city that are somewhat off the well beaten tourist trail. Today we are walking through the narrow alleys, with surprises around every corner, that make up the huge crescent between the northern bank of the Grand Canal and the lagoon, to the old Jewish Ghetto. The former Ghetto is now a lively and popular district of the city where the religious and administrative institutions of the Jewish Community and its five synagogues still exist.

The word ‘ghetto’ originated in Venice, derived from getto (meaning ‘casting’) due to an old iron foundry once situated here. As of 1492, many Jewish refugees started arriving in Venice after expulsion from Spain. At first, they enjoyed complete freedom but in 1527 they were obliged by law to move to the Ghetto to live, to wear a sign of identification, to remain behind locked gates from 6.00 p.m. every night until 12.00 p.m. the following day. Their island home was circled by an armed patrol boat to make sure that they kept the night curfew. Many other onerous regulations were also included, in exchange for which the Community was granted the freedom to practice its faith and protection in the case of war.

There were various reasons for this move on the part of the Venetian authorities. Jealousy of the Jewish business acumen was possibly one reason. Banned by the Venetian Republic from practising manual trades, many Jews became skilled doctors or moneylenders. Most were refugees from other parts of Europe, and they are credited with introducing rice-based dishes to Venetian cuisine. Another reason for this move was to prevent Jewish fraternisation with ‘Christian’ Venetians. They were not allowed to build new houses on the island so, with typical Jewish ingenuity, they built upwards adding stories to the already existing buildings. Waves of new arrivals saw each language group incorporate its own synagogue on a floor in some of these buildings raising them to seven floors in height. After the fall of the Venetian Republic in 1797, Napoleon decreed the end of the Jewish segregation and the equalisation of the Jews to other citizens. This provision became definitive when Venice was annexed to the Italian Kingdom.

In September 1938, the introduction of fascist racial laws deprived the Jews of civil rights, and the Jewish community entered a difficult period. In September 1943, Italy changed from being an ally of Nazi Germany into an occupied country, and the Nazis started a systematic hunt for Jews in Venice as in other Italian cities. In November 1943, Jews were declared ‘enemy aliens’ which meant they could be arrested, and their property seized. Although some Jews managed to escape to neutral Switzerland or Allied-occupied southern Italy, possibly as many as 246 Jews were detained (including some 20 residents of a Jewish convalescence home) and deported to  the Nazi death camp at Auschwitz-Birkenau. Only eight Jewish residents of Venice emerged from the death camps, and the Jewish population of Venice was halved to just over 1,000 because of WWII. Today only about 30 Jews still live in the Ghetto, while a further 470 Jews reside in other parts of the city.

We want to visit the old Jewish Ghetto for several reasons. Firstly, the walk there will take us through some very interesting places such as the Campo dei Mori, an odd funnel-shaped square with its three statues of Arabian-style ‘Moors’ – most probably medieval traders who made their home there – and a house by a bridge over Rio della Sensa (number 3399), once the home of the renowned 16th century Venetian artist Tintoretto. Secondly, however, we want to visit the old Jewish Ghetto because we have been told that it is both a very interesting and deeply moving experience.

Julia has a map, and a plan, and so we enjoy a fascinating walk to the Ghetto noting various interesting places on the way, enjoying seeing some of the locals out rowing their own boats in preparation for the upcoming races (there are a lot of rowing clubs in the vicinity), and stopping off for coffee of course. We know that we are nearing the Ghetto when we start seeing people in traditional Jewish dress. We cross the bridge into the Campo del Ghetto Nuovo and are immediately aware of the tall buildings, the Jewish Museum, and the powerful, prominent memorial plaque to Venice’s Holocaust victims. We want to join the tour of the various synagogues, but we must wait until after lunch for the next tour. We decide to have a look at the museum, situated between the two most ancient Venetian synagogues, first and then come back later for the tour. The museum is small but fascinating and we learn a lot about the Jewish Faith (that we did not know before) and the history of the Jewish Community of Venice. We still have an hour before the tour of the synagogues starts so we decide to have lunch and find a lovely little restaurant nearby where we enjoy Venetian liver – a local speciality – and a Venetian spritz or two.

After lunch we join the 30 or so other people on the tour. There are several Jewish tourists in the party including a man who is very knowledgeable about Judaism, most probably a teacher or Rabbi we suspect. He is very impressive and displays the kind of chutzpah associated with Jewish people (especially the men one suspects). Chutzpah is a Yiddish word that derives from the Hebrew word ḥutspâ (meaning ‘insolence’ or ‘cheek’ or ‘audacity’) describing a kind of supreme self-confidence, nerve, gall that can be used for good or for bad. It is a kind of ‘in-your-face-ness’ that I both admire and hate at the same time.  This man has bucket loads of it. I admire his knowledge but struggle with his know-it-all attitude. Whereas the rest of us on the tour ask questions this man gives opinions. He has opinions about everything including the place of women within Judaism. He obviously likes the idea that these synagogues follow the traditional pattern and that women are relegated to the galleries (even though the numbers at worship these days are very small).

Our guide on the tour of the synagogues is a youngish Jewish lady who knows her stuff. She is clearly very intelligent and gives our friend as good as she gets. She must have met a good number of his kind before and handles him and his opinions with an equal measure of skill, reason, knowledge and winsomeness. She displays a chutzpah of her own but a more attractive and impressive kind.

After we have looked at the two synagogues within the buildings housing the Jewish museum we go back into the Campo del Ghetto Nuovo so that our guide can show us from the outside where the synagogues are in the tall buildings we have just been in. She explains more about the history of the Jews in Venice, particularly the story of the war years in the 1930s and 1940s. We look at the impressive memorial in more detail and see how graphic and powerful a picture it portrays. Our final port of call is another synagogue just a stone’s throw away, opposite the lovely restaurant where we enjoyed our wonderful lunch. Whilst we are standing around in our group listening to our guide I notice some Jewish boys playing football in the square where we are standing. Suddenly one of the boys belts the solid leather football towards the makeshift goal near the museum, miss-kicks it completely, and sends it sailing towards our group. It strikes chutzpah man’s wife on the head. She is OK but very angry. She rounds on the boys playing football and gives them a real mouthful. Chutzpah plus! Julia and I look at each other and grin. So much for chutzpah man ruling the roost, being head of the family, keeping his wife and everybody else in their place? We know immediately who really wears the trousers in his house!