Posted by jimandjuliabinney on October 5, 2015 in Uncategorized 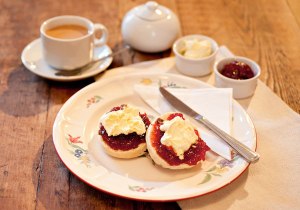 An English ‘cream tea’ is a light afternoon snack consisting of tea taken with a combination of scones, clotted cream, and jam. Traditionally a speciality of Devon and Cornwall, cream teas are offered for sale in tea rooms in those two counties, as well as in other parts of England. There are regional variations as to how a cream tea should preferably be eaten. The Devonshire method is to split the scone in two, cover each half with clotted cream, and then add strawberry jam on top. Traditionally it is important that the scones be warm (ideally, freshly baked), and that clotted (rather than whipped) cream and strawberry jam, (rather than any other variety) are used. Butter is generally not included, and the tea should be served with milk. In Cornwall, however, the warm scone is first buttered, then spread with strawberry jam, and finally topped with a spoonful of clotted cream. Needless to say there is an ongoing historical dispute between the Cornish and Devonshire people as to both the origin of the ‘cream tea’ and which county’s method of layering cream and jam is best?

Here in Dorset, however, us locals have risen above such petty disputes. We too have our own ‘cream teas’ which are very popular especially with visitors during the tourist season. You see them advertised everywhere. Unlike the Cornish and Devon residents we don’t make a fuss about which county has the best cream tea, or in which order you choose to have your jam and cream. In our normal quiet, understated way, we simply know that (despite all the fuss our west country neighbours make), Dorset cream teas are the best!

I was reminded of this (for some reason) the other day when we were worshipping at our home church in Dorchester. One of the church members had heard that Julia had been invited to ‘preach with a view’ to the pastorate of Knaphill Baptist Church, Woking. Now, Julia and I are seen by the good folk at Dorchester Baptist Church very much as a ‘team’, and this good lady was asking if we would both be ‘called’ if the ‘preach with a view’ was successful? I explained that it was just Julia who was being considered, and that I was quite happy with this. It was certainly true that I was viewed in some circles as a ‘BOGOF’ (Buy One Get One Free), and I was happy to act as some kind of ‘Associate Minister’ if the church wanted me to fulfil that role, or simply serve in the background as a ‘normal’ church member. ‘Never mind’ said the lady in response, and (seeking to encourage me) continued ‘cream always rises to the surface, you know!’

Talking of ‘church’ I ought to say that although we are members of Dorchester Baptist Church, and attend regularly, we also ‘play hooky’ occasionally and attend our local Church of England. Julia’s mother, Olivia, is ‘Church of England’ and so we go with her to one or other of the three Anglican Churches in the local Benefice. We know quite a number of people in these churches having worshipped in all of them at one time or another, attended their annual ‘Lent Groups’, and supported their various fêtes and sales. There are three Parishes with one part-time Parish Priest over all three. I say part-time but actually she doesn’t really get paid … she just gets the ‘vicarage’ to live in free of charge in return for serving the three churches. We actually have a new Parish Priest who has only recently started. She is a hairdresser by profession and runs her own business three days a week, and serves the churches the rest of the time. This has led to quite a few jokes about the ‘length’ of the sermon, and the ‘style’ of the various services, and so on? Actually she is quite good and we like her.

Rural church life is ‘interesting’ to say the least. In our Benefice two of the parishes don’t really ‘get on’ with each other and few of the parishioners attend services held in the other parish’s church. Nobody quite knows why this is … something to do with being on ‘rival sides’ during the 17th century English Civil Wars, I believe?

The actual church services are also quite often ‘fun’ … if you like that sort of thing … with all sorts of quirky Church of England ‘traditions’ historical and local? There is the ‘finding your way round the order of service book’ for a start! What a rigmarole? Now, don’t get me wrong … I actually like the thoughtful way in which the various ‘prayer book’ services are arranged. I like the balance of the prayers (prayers of thanksgiving, confession, etc.), the variety of the Bible readings (ensuring a wide coverage of relevant scripture throughout the church year), the prominent place given to Communion (and the fact that they have ‘proper’ wine), the outward looking nature of intercessory prayer for ‘the church and for the world’, and so on. But all too often, in our local churches, nobody seems to know which page in the order of service book we are supposed to be on – even the person officiating? We all scrabble around trying to find the appropriate place. It is the bane of my mother-in-law’s life. Although she has been ‘Church of England’ all her life, she gave up trying to ‘find her way round the book’ ages ago. At 88 years of age she just wants to sit there and listen. But ‘helpful people’ will insist of ‘trying to find the right page for her’ … even if they can’t find it for themselves?

And then there is the organist? I really like our organist! He is not really ‘Church of England’ … his roots are ‘somewhere else’ but he has been attending the local ‘C of E’ for the last 40 years because … well, just ‘because’? He always plays stuff from the old CSSM Chorus Book, or Golden Bells, or Redemption Hymnal before and after the various services. He is a ‘jolly type’ who always manages to find a ‘jolly tune’ for the hymns (unless instructed otherwise). He likes it when Julia and I come to church because we ‘sing up’, and he thinks we are ‘proper Christians’ (whatever that means).

My own ‘pet hate’ however, is the weekly ‘birthday and chocolate time’? This is something that one of the previous Parish Priests started about 10 years ago and has been carried on ever since by the various incumbents. At the conclusion of the service, in the ‘parish notices’ slot, the Priest asks the congregation if anyone has had a birthday the previous week. If anyone is foolish enough to confess that they have, they are summoned up to the front, given a bar of chocolate, and we all have to sing ‘Happy Birthday’ to them? It might have been fun once upon a time, and it might be o.k. for any children present, but it has now become excruciatingly embarrassing for just about everyone. We all now keep quiet about our birthdays! The last thing the majority of us do when it actually is our birthday is confess to the fact! We have all learned to not even tell our friends (because there are always those ‘hearty souls’ who will shout out ‘It was so-and-so’s birthday last week!’ … if they are in the know).

In one of the churches there are a group of people who intensely dislike ‘exchanging the peace’ just prior to Communion … the custom of everyone getting up and greeting each other with a handshake, or a hug, or a kiss accompanied by the words ‘The peace of the Lord be with you!’ In this particular church the dissidents all sit in one particular corner of the church building which has now affectionately become known as ‘the peace free zone’? Well, I would like to see the introduction of a ‘chocolate free zone’ or even better the scrapping of this whole embarrassing ‘birthday and chocolate’ thing. By all means let us sing ‘Happy Birthday’ when someone reaches a ‘significant birthday’ like reaching 100 years of age, say … but not every week for any birthday?

So … after all this meandering about recalling what it is like to worship in our local parish church here in rural Dorsetshire … what you really want to know is ‘How did Julia get on when she preached with a view at Knaphill Baptist Church, Woking?’ Well … we don’t know yet? The lady did brilliantly! The entire congregation spontaneously applauded Julia at the conclusion of her sermon! This was because it really was that good … and not because she had finally finished the sermon?! We will know more after the church has had its Special Church Meeting next Thursday to make a decision. We are not anxious about this, however. We are convinced that God has a perfect plan and purpose for us and that this will be revealed in due course. As God tells us through his prophet Jeremiah, ‘I have plans for you, declares the Lord, plans for good and not for evil, plans to give you hope and a future’ (Jeremiah 29:11).

We had a great time at Knaphill this last Sunday, however … and the church even asked me how I saw myself ‘fitting in’ if they called Julia to be their new Pastor? I answered circumspectly. The last thing I would want to do would be to get in Julia’s way. I want to support her, not hinder her, after all. I certainly still feel that God hasn’t finished with me yet, and that I still have plenty to offer. But it may be ‘out there’ rather than ‘in here’ as far as the local church is concerned, but we shall see. However, I can’t help thinking about what that good lady in Dorchester Baptist Church said to me the other day in order to encourage me: ‘Don’t worry … cream always rises to the surface, you know!’ ‘Yes’, I think to myself, ‘cream does rise to the surface … but usually in clots!’