Posted by jimandjuliabinney on August 4, 2015 in Uncategorized 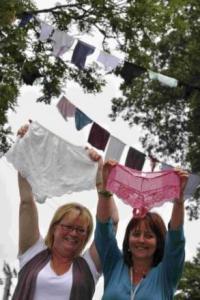 Unusual Bunting at the Village Fête

Egged on by Julia I exchange my £1 coin for three wooden balls … and hurl them one after the other at the coconuts in the shy. I realise that I am taking a big risk. After all my boasting about what a good cricketer I was in my youth I could easily end up with ‘egg on my face’? To my amazement the first ball not only hits a coconut full on, but actually knocks it off its perch! How come its not ‘nailed on’ to the coconut holder like at most fairs that I have been to? I am so shocked that I miss with my other two balls … but walk away from the stall with my pride intact and my prize coconut in hand!

It is (as you may have guessed) ‘Fête Season’ down here in West Dorset. During the summer months there is at least one village or church fête taking place somewhere or other as villages and churches seek to raise money for one cause or another. Village or church fêtes are common in the UK. These are usually outdoor shows held on village greens or recreation grounds with a variety of activities. They are organised by an ad hoc committee of volunteers from organisations like religious groups or residents’ associations. Attractions seen at village fêtes include raffles, coconut shies, white elephant stalls, cakes, and home produce such as jams and pickles. Entertainment may include Morris dancing, tug of war, fancy dress and pet shows. In some ways they are the equivalent of a county fair in the USA.

Julia and I love these village/church fêtes although admittedly some really are ‘a fête worse than death’? For us they are a constant source of fun, interest, amusement and humour … as well as being a source of raising money for good causes. Our favourite fête, however, is the Langton Herring annual Fête and Dog Show held usually on the last Saturday in July at a neighbouring village to us here in our small hamlet of Rodden. If you want to picture the scene in your mind’s eye, think of  the village fête episode of the Vicar of Dibley … but without Kylie Minogue!

There are lots of reasons why we love this particular fête, not least because (unlike many of the fêtes around here) it is a joint venture between the village and the church. As a result it brings the community together rather than divide it. It is also usually very innovative and great fun. At the beginning of July the bunting goes up all round the village and the approach roads, and the advertising posters are posted in prominent places. Some years the bunting is your normal flags, but quite often in can be very innovative depending on the particular theme for the fête in any given year. When the theme was ‘wild life’, a year or so ago, the bunting was in the form of ‘monkeys’ of one kind or another hanging up all over the place throughout the village. My favourite ‘innovation’ however was a few years ago, when the recession first hit and the organising committee felt everything was ‘pants’, and so instead of your usual bunting ‘underwear’ of various kinds were hung up all over the village donated by various villagers! Even the Vicar donated a pair of ‘holy’ pants for the cause? The decision raise a few eyebrows but certainly attracted a lot of extra publicity.

After the recent rain it is a gloriously sunny day on the day of this year’s fête, so we drive the mile or so to Langton Herring and find our way to the field which doubles as a car park for the occasion. We take the short walk to the Village Green where the fête itself is being held. The fête started a hour or so before our arrival and we pass mostly disgruntled dog owners who are leaving already because their ‘precious mutt’ failed to win anything at the Dog Show. Those dog owners whose dogs have actually won something never leave early, but rather spend the rest of the afternoon and evening wandering round the fête with their dogs proudly displaying their rosettes, so that everyone can see that they were successful. The Langton Herring Fête is one of the few fêtes that has a proper ‘dog’ show’ running alongside. It attracts people from miles around, even as far away as London, and there are all kinds of classes and groups. If they had a ‘naughtiest dog’ award we would definitely enter Reggie Doggie … he would surely win hands down?

It is interesting listening to the conversations of these defeated dog owners as they trundle back to the car park. ‘The judges must be blind … our Fido was easily the best dog in the show … just because he weed over the judge’s handbag/bit the chief judge/ran off with the prize winning cake from the cake stall, was no reason not to award him first prize, was it?’

There is a central arena, where the various ‘acts’ perform or certain other ‘events’ are judges, and this is surrounded by various stalls of one kind or another. The ‘acts’ usually include things like concert bands, displays by the Morris dancers, majorettes or police dogs or country dancing troupes. This year we had some Line Dancing in which the general public were invited to join resulting in ‘glorious chaos’. There is always plenty to keep the children occupied including ‘Toss the Wellie’ and ‘Splat the Rat’ games. There is a children’s entertainer … it is usually someone called ‘Captain Stupid’ (who lives up to his name) … who adds even more madness and mayhem to the occasion.

The various stalls sell second-hand books and DVDs, plants, bric-a-brac and local produce. As well as the coconut shy there are skittles, throwing the horseshoe, a barbecue, a Pimm’s tent, and a beer tent, etc. We visit every stall and meet numerous people that we know from the surrounding area. Having lived here for nearly five years we are considered to be ‘locals’ (no long ‘grockles’) now! We spend our money buying various things we don’t really need. We spend Julia’s mother’s money (which she has given us to spend as her contribution to the cause) on things she doesn’t really need either. We will probably keep them for a year … and then re-donate them again for someone else to buy next year?

We don’t stay for the band and the dancing in the evening. I would not want to spoil what has been a really fun day for everyone by inflicting my ‘dad dancing’ on them? And in any case, I have my ‘prize coconut’ to show off to Julia’s mother and Reggie Doggie when we get home. It has been years since I won a coconut, or have eaten one for that matter. I think back to my childhood and deep in the recesses of my mind recall drilling a hole in the ‘eyelets’ of the coconut and drinking the ‘milk’ through them … and then breaking the coconut open with a hammer and devouring the succulent flesh. I drill holes through the eyelets of my ‘prize coconut’ with a skewer … but there is no milk … the coconut is dry? I break the coconut open with a hammer … and the flesh is all rotten? Goodness knows how old these coconuts on the fête coconut shy actually were? Perhaps they have been bringing the same coconuts out year after year since the fête started in the year dot? There is nothing for it but to donate my hard won coconut to another worthy cause … our compost heap at the bottom of the garden!