THE HINGE OF HISTORY (Christmas)

Posted by jimandjuliabinney on December 22, 2014 in Uncategorized 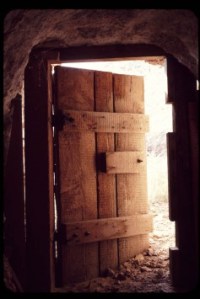 There is a story told of a very religious couple, touring the Holy Land during December, who decided that it would be a very meaningful experience for them to spend Christmas Eve in Bethlehem, the birthplace of Jesus. Arriving in Bethlehem they searched high and low for accommodation but nothing was available at any price. Finally they pulled up in front of the Sheraton Hotel and the husband got out of the car telling his wife: ‘Stay here, Sweetie … let me see if I can do something for us?’ He enquired at Reception if there were any rooms available, only to be told by the Manager that there were none: ‘I’m sorry sir, but its Christmas Eve, our busiest time of the year.’ No matter how much the man offered to pay, the Manager said that he had nothing. Finally, in exasperation, the man said to the Manager: ‘I bet if I told you my name was Joseph, and that the woman waiting in the car outside was called Mary, and that she had a new-born child … you would offer us a room!’ ‘Well’ stammered the Manager, ‘I … I suppose I would.’ ‘Okay,’ said the man. ‘I guarantee you that they’re not coming tonight … so we’ll take their room!’

A few years ago, Julia and I visited the Church of the Nativity in Bethlehem. The Church itself is situated at the edge of Manger Square, a large paved courtyard in front of the Church, where crowds gather on Christmas Eve to sing Christmas carols in anticipation of the midnight services celebrating the birth of the Christ-child. The Church is entered through a very low door called the ‘Door of Humility’ because you have to stoop to enter. On either side of the impressive Sanctuary there are winding stairs that lead down to the Grotto of the Nativity, an underground cave located beneath the Church that enshrines the site where Jesus is said to have been born. The exact spot is marked beneath an altar by a 14-pointed silver star set into the marble floor and surrounded by silver lamps, and another altar in the Grotto marks the site where traditionally Mary laid the newborn baby Jesus in the manger.

When Julia and I were there the Church was packed with tourists and there was a long queue of people waiting to get into the Grotto of the Nativity. Fortunately for us, we had hired the services of a local tour guide – our way of contributing to the local economy which has been badly hit since the building of ‘the wall’ separating Palestine from Israel – and he was able to bypass the queues and get us into the Grotto without too long a delay. Like many of the ‘sacred sites’ in Israel-Palestine today, the Church of the Nativity and the Grotto itself have been turned into ‘tourist attractions’ albeit with religious overtones, and one has to try and find space in one’s head to be able to ‘cut through’ all this and get back to an insignificant town, a somewhat inconspicuous dwelling, a basement-stable full of animals, the sudden birth of a child to a very young mother … and to the mind-blowing, significance of what really happened here in Bethlehem 2,000 years ago! As Ralph Sockman suggests, ‘The hinge of history is to be found on the door of a Bethlehem stable!’

Bethlehem (which means ‘House of Bread’) is a small town six miles south-west of Jerusalem, nearly 2,500 feet above sea level. Its population was not great at the time Jesus. In Old Testament times David lived in Bethlehem until he was anointed by the Prophet Samuel to be King. David was a shepherd in his youth on the hills surrounding this small town. After King David’s time Bethlehem faded into insignificance. Only the Prophet Micah seems to have foreseen that this town would one day be the venue for the  most important birth in human history: ‘But you, O Bethlehem Ephrathah, are only a small village in Judah. Yet a Ruler of Israel will come from you, One whose origins are from the distant past’ (Micah 5:2). An inn in Bethlehem was therefore an unlikely place for the birth of God’s Son. A Bethlehem inn in those days was no Sheraton Hotel … but the situation may well not have been quite as bad as some interpretations of the ‘birth narrative’ suggest?

The Lectionary Gospel Reading for Christmas Day reminds us of the unusual circumstances of Jesus’ birth. Luke tells us that ‘At that time the Roman emperor, Augustus, decreed that a census should be taken throughout the Roman Empire (this was the first census taken when Quirinius was governor of Syria).  All returned to their own ancestral towns to register for this census. And because Joseph was a descendant of King David, he had to go to Bethlehem in Judea, David’s ancient home. He travelled there from the village of Nazareth in Galilee. He took with him Mary, his fiancée, who was heavily pregnant. And while they were there, the time came for her baby to be born. She gave birth to her first child, a son. She wrapped him snugly in strips of cloth and laid him in a manger, because there was no lodging available for them’ (Luke 2:1-7).

We know the Christmas Story so well that we don’t even have to re-read the biblical narrative to re-tell the story … or so we think? Mary and Joseph travelled from Nazareth to Bethlehem and were turned away from the village inn by the innkeeper. They took refuge in a barn, where baby Jesus was born and laid in a manger. When we do re-read the biblical narrative, however, we see that actually Luke neither quotes nor mentions an innkeeper? I would suggest that in actual fact the story does not refer to an inn but rather to a house! The word translated here as ‘inn’ in the Kings James Bible is not the normal word for ‘inn’ in Greek – which we find Luke using in the story of the Good Samaritan for example (Luke 10:30-37). Rather the word indicates a ‘guest room’ – which we find Luke using in his account of Jesus meeting with his disciples for the Last Supper (Luke 22:7-13). The probability, therefore, is that what we have here is a reference to the ‘guest room’ in Joseph’s family home in Bethlehem.

Mary and Joseph went to Bethlehem planning to stay in the family home, along with the rest of the family, some of whom would also have travelled there from elsewhere, for the census. Arriving at Joseph’s ancestral home, however, they found it already full of other family members who had arrived earlier. The exact reason why space was not made for a heavily pregnant woman is unknown. It may have been because the rest of the family ‘had a problem’ with Mary being pregnant without actually being married to Joseph? Or it may have been because they were not expecting Mary to actually give birth quite so soon? Or it may have been because the house was full of elderly members of Joseph’s family, who had priority.

Whatever the circumstances it appears that the only available space in the family home, where Joseph and Mary could possibly stay at that time, was in basement rooms where the animals belonging to the resident family were also sometimes housed.  In the ancient world (as well as in primitive modern cultures) animals were regularly stabled in homes at night. A small number of flock animals were housed, not in attached exterior sheds, but inside the house in one of the basement or lower ground floor rooms. Here, animals, tools and agricultural produce were stored. Here, too, food was prepared and possibly consumed. The family sleeping quarters were on a higher floor (an ‘upper room’). By being inside, the animals were protected from the elements and theft. In addition, their presence provided body heat for cool nights, access to milk for the daily meal and dung as a critical fuel source. Mangers are animal feeding troughs, and it would be in this room, where the animals were stabled, where one would expect to find them. Consequently, Mary and Joseph did not find space in the living quarters of the ancestral family home. Instead, they stayed downstairs in the domestic stable, still within the ancestral home, where a manger or two was located. Here (as the Christmas narrative unfolds) we learn that they were visited by the shepherds, and maybe the ‘Wise Men’ some time later.

What is of real interest, and mind-boggling significance, about this whole story, however, is not so much the circumstances surrounding the birth of Jesus, but the astounding fact that here we have recorded the birth of One who is no other than the promised Christ-child himself! As Matthew records, in his version of the events, the birth of One who was to be given two significant names, indicative of just who he was, and why he had come! When Joseph, very understandably, hesitates about going through with marriage to Mary, an angel appears to him in a dream and reveals that all that is happening is in fulfilment of God’s eternal plans and purposes (Matthew 1:18-25). Furthermore, the angel tells him that the child is to be called ‘Immanuel, which means God with us’ (v.23) and ‘Jesus, for he will save his people from their sins’ (V.21). This child, born in a stable in Bethlehem 2,000 years ago, is no ordinary child then. He is both God and Saviour! He is God – not a God who is totally ‘other’, distant from us – but ‘God with us’ in human form. If we want to know what God is like, all we have to do is look at Jesus. He is Saviour – born in a manger in order to die on a cross in order to save us from the power of Satan, sin and death, and from an empty and wasted way of life! As John, reflecting much later on the birth of Christ, tells us: ‘For God loved the world so much that he gave his one and only Son, so that everyone who believes in him will not perish but have eternal life. God sent his Son into the world not to judge the world, but to save the world through him’ (John 3:16,17). Thus it has rightly been suggested, with reference to Jesus Christ, that ‘History’ is in fact ‘His Story’! And therefore it is equally true that ‘The hinge of history is to be found on the door of a Bethlehem stable!’

Although a committed Baptist-Christian, one of the things I like about Anglican Worship, is that Anglican-Christians stand and say together one of the Creeds in response to the sermon. I have used this from time to time in our own Baptist Worship, and would like to see it used more often. I am not suggesting that we always do this, or that we always use one of the historic Creeds. There is, however, something to be said for writing new ‘creeds’ which sum up the essence of the Service and Sermon on any particular Sunday. To stand and say such words out loud in such a way, in the presence of God and each other, helps to affirm the truth of that which we have just engaged with, and somehow cements it in our hearts and lives. So here, in response to what I have sought to say in this particular blog, is a ‘Christmas Creed’: