TODAY YOU WILL BE WITH ME IN PARADISE! (Jesus’ Seven Sayings from the Cross 2)

Posted by jimandjuliabinney on April 16, 2014 in Uncategorized 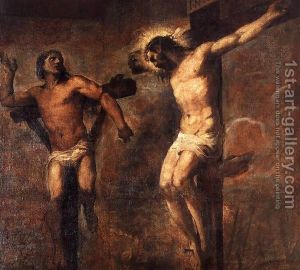 Jesus was crucified between two criminals. Even while he was dying, one of them – known as ‘the unrepentant thief’ – joined in with the crowd hurling insults at Jesus, scoffing and cursing him. But the other one – known as the penitent thief – was different. What did he see? What did he understand? He believed Jesus was a King – ‘Jesus remember me when you come into your kingdom’ (Luke 23:42). He accepted the justice he had received. He knew he deserved his punishment, just as much as he knew Jesus didn’t. And he feared God. As he was dying, he had a glimpse of eternity, of life beyond the grave. Jesus spoke words of comfort to him, words of assurance and hope – ‘Truly, I say to you, today you will be with me in paradise’ (Luke 23:43)! No ‘sinners prayer’ uttered? No ‘rite of baptism’ demanded? No apparent ‘gift of the Holy Spirit’ given? Just the promise of Jesus that there was nothing to fear for this man because, beyond the moment of his death, he would be with Jesus for eternity … for as the Apostle Paul implies, ‘paradise’ is part of heaven itself (2 Corinthians12:4).

Some people ask, ‘How can it have been “today”?!’ For three days Jesus was in the grave and, after the resurrection, it was a while before his ascension into heaven. Where is ‘paradise’? Is it indeed heaven? What does happen when we die? Is ‘paradise’ a conscious intermediate state like a royal garden where a guest waits for the king? Or do we enter an unconscious state, like a dreamless sleep, to be woken at the coming of the Lord? Or is there no intermediate state at all – so as soon as we die and have stepped out of time, we are immediately resurrected into eternity with God? What is the correct answer? All of us, who like the penitent thief truly put their trust in Jesus as Saviour, will find out one day!

What we can say for sure, is that ‘time’ takes on a whole different dimension in eternity! What is ‘today’ in terms of eternity? Eternity is the everlasting ‘now’. What is important to Jesus – which is why Jesus said what he did, and why what he said is important for us – is that, like the penitent thief, we need not fear death but believe and trust in King Jesus and receive his promise that we will be with him forever! Paradise is wherever Jesus is!

3 comments on “TODAY YOU WILL BE WITH ME IN PARADISE! (Jesus’ Seven Sayings from the Cross 2)”