Posted by jimandjuliabinney on January 13, 2014 in Uncategorized 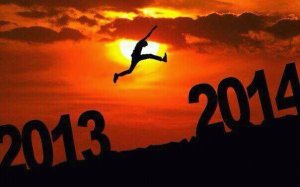 A Leap of Faith

One of my favourite films is Indiana Jones and the Last Crusade, the 1989 fantasy-adventure film directed by Steven Spielberg. It is the third instalment in the Indiana Jones franchise. In the film, set largely in 1938, Indiana searches for his father, a Holy Grail scholar, who has been kidnapped by Nazis, and for the Grail itself. Towards the conclusion of the story Indy and his father find the temple where the Grail is kept but have to overcome three obstacles in order to reach the Grail. The third of these obstacles literally involves a ‘leap of faith’. Barring their way to the entrance of the cave where the Grail is to be found is a huge chasm that is far too wide to simply step across. According to the old book, that has provided all the clues along the way that Indy has needed to find the Grail, the only way to cross this chasm is to literally step out in faith into what seems to be nothing (apart from a huge drop of several thousand feet into the chasm and certain death). When Indy finally manages to pluck up enough courage to step out in faith, however, a previously invisible bridge materialises beneath his feet and he is able to cross over.

It is Francis Sellers Collins, the American physician-geneticist noted for his discoveries of disease genes and his leadership of the Human Genome Project, and an evangelical Christian, who suggests that ‘Nobody gets argued all the way into becoming a believer on the sheer basis of logic and reason. That requires a leap of faith’. The word ‘faith’ in the New Testament implies the necessity of ‘trust’. It is true that the word also means ‘a firm persuasion or conviction based on hearing from God’ but that persuasion or conviction involves trusting God’s word when we hear it! This is true of what we might call ‘saving faith’ – that initial step of faith by which we trust ourselves to God for the gift of salvation. And it is also true for those further ‘steps of faith’ – those things which God will most certainly call us to in future days as we continue in our journey of following Christ as Saviour and Lord.

Jesus began his public ministry by stressing the vital nature of repentance and faith for any who were serious about finding and following the Living God in this life and beyond. Mark tells us that ‘Jesus went into Galilee, proclaiming the good news of God: The time has come … the Kingdom of God is right here, right now … repent and believe the good news’ (Mark 1:14,15). In other words, turn away from doing your own thing and going your own way and turn to God and his ways … and put your trust in, have faith in, the promise of the Gospel message! Of course it was not only ‘initial faith’ that Jesus spoke about, as important as this was. His teaching to his disciples was full of explanation and exhortation concerning the vital place of ‘ongoing faith’. For example, when Jesus came down from the Mount of Transfiguration he discovered that the majority of his disciples (who had remained below) had unsuccessfully attempted to deliver a demon-possessed boy (Matthew 17:14-21). When these same disciples asked him later why they couldn’t drive out the demon, Jesus replied ‘Because you have so little faith. Truly I tell you, if you have faith as small as a mustard seed, you can say to this mountain, “Move from here to there” and it will move. Nothing will be impossible for you!’ (vs.20,21). Jesus was not saying here that these disciples didn’t have any faith. He was saying that they were not making proper use of the faith they already had!?

‘Faith’ is an essential ingredient for us if we are to experience salvation, and if we are to fulfil the plans and purposes God has for us as individuals and as churches. The Writer to the Hebrews tells us that ‘Without faith we cannot please God’ (Hebrews 11:6) and Paul tells us that we are to ‘walk by faith and not by sight’ (2 Corinthians 5:7). Whilst I have, and God-willing will always have, a passion to see men and women who do not know Jesus Christ as their Saviour and Lord turn to him in genuine repentance and faith, my real concern at this particular time is for Christians and local churches who need to step out in faith in response to all that God is calling us to today!

The situation in many local churches here in the UK at this moment in time is dire. Congregations are dwindling, membership is declining, churches are closing. I have been a Baptist Minister for more than 40 years now, and a Christian for more that 50 years, and in that time I have seen a number of churches that were once numerically large become just a shadow of what they once were. There are, of course, some churches that are growing and new churches have been planted, but we must not let the ‘success stories’ blind us to the overwhelming reality. Julia is currently in what is known as the ‘Settlement Process’ in which our Baptist Regional Ministers seek to match Baptist Ministers looking for churches with ‘vacant churches’ looking for new Ministers. No doubt, when she eventually settles, she will drag me along with her in some capacity or other even if it is only cutting the crusts of the cucumber sandwiches for the ‘vicarage tea parties’?! Each month or so we are sent the ‘Pastoral Vacancies List’ which lists the various churches looking for Ministers and provides a short profile about them. The idea is that if we come across a church we think we might be suited for, we can request that Julia’s name and profile be sent there. Needless to say, we have never availed ourselves of this option, preferring to leave it to our Regional Ministers … and to God! Some of these church profiles make for exciting reading … but many of them paint somewhat of a sad picture. Having been ‘on the List’ for two years now we are vary aware that some of these churches have also been there for a similar length of time or even longer without settling, even though there are far more Ministers looking than churches seeking so they should be spoilt for choice?! Now I know (as my friend, and a former Regional Minister himself, David Harper, says) that for both Minister and churches, ‘It is better to get it right than to get it soon!’ For this very reason – because we have not been convinced that any of these situations were right – we have declined to take further the few approaches, that have come Julia’s way over the past two years. But, looking at some of these church profiles, one can’t help but feel a sense of defeat that comes across, together with a real fear of stepping out in faith and trusting God to do something fresh and new amongst them. As James Cameron (the Canadian film director, and self-confessed ‘converted agnostic’) says, ‘There are many talented people who haven’t fulfilled their dreams because they over thought it, or they were too cautious, and were unwilling to make the leap of faith!’

My personal conviction is that God doesn’t want any of us, or any church for that matter, to feel this way, and wants to do something significant in each individual heart and every congregation who will look to him, trust him, and take that leap of faith in response to his word. Jeremiah encourages God’s people of every generation to believe God’s word is true when God tells us, ‘I know the plans I have for you … plans for good and not for evil, plans to give you hope and a future!’ (Jeremiah 29:11). If only we would trust God, believe that this is true, and step out in faith in response to God. Hebrews 11 lists a whole series of men and women – ‘heroes of faith’ – who heard the call of God to do something ‘risky’ and as a result saw amazing things happen. Noah built an ark and thus saved his family, Abraham ventured forth into the unknown and found the Promised Land, and so on. In each case God called these people to take a leap of faith in response to a particular promise he gave them or task he called them to. In each case God’s word inspired faith in their hearts – so much so that it was easier to believe than not believe! In each case, however, they had to trust God – to take him at his word and be brave and bold in taking that initial leap of faith in response to that which God was calling them to, and then to keep ‘waking by faith’. And, as P T Forsyth (that great Congregational Church theologian) reminds us: ‘It is well to get rid of the idea that faith is a matter of spiritual heroism only for a few select spirits. There are heroes of faith, but faith is not only for heroes. It is a matter of spiritual maturity!’

So in these early weeks of another New Year, may I encourage you – as an individual or as a local church – to take time out to listen to God, shake off your fears, and take a real leap of faith into 2014. Remember

Faith hears the inaudible,
Sees the invisible,
Believes the incredible, and
Receives the impossible!