ANOTHER BRICK IN THE WALL

Posted by jimandjuliabinney on July 13, 2013 in Uncategorized 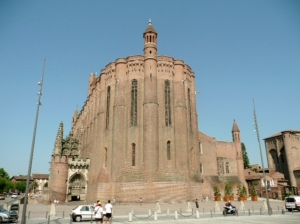 We round the bend in the road and there is Albi lying in the plain before us, the Cathedral dominating the city. It is very impressive, even more so when we actually drive into Albi itself and cross the main bridge over the River Tarn with its amazing view of the Cathedral and the Bishop’s Palace. The brick built Cathedral – the largest brick built building in the world we are led to believe – seems to glow pink and red in the bright sunlight. Even Pink Floyd would be impressed!

Albi Cathedral, formally the Cathedral of Saint Cecilia is the most important religious building in Albi, and the seat of the Archbishop of Albi. First built as a fortress the Gothic Cathedral was constructed in brick between 1287 to 1480 in the wake of the Albigensian or Cathar heresy in the area. The French monarch and the Roman Catholic Church mounted a brutal crusade to suppress the Cathars, with great loss of life to the local population. In the aftermath of the bloodshed, the Cathedral’s dominant presence and fortress-like exterior were intended to convey the power and authority of Roman Catholicism. The instigator of the Cathedral’s construction was Bernard de Castanet, Bishop of Albi and Inquisitor of Languedoc.

As suitable building stone is not found locally, the Cathedral is built almost entirely of brick and notable architectural features include the bell-tower which is 256 ft tall, and an elaborate porch entered by a fortified stair, which is the primary entrance to the Cathedral rather than through the west front, as is traditional in France. The elaborate interior stands in stark contrast to the cathedral’s military exterior. The central ‘Chœur’ (reserved for members of the religious order) is surrounded by a roodscreen with detailed filigree stone work. Below the organ, a fresco of the Last Judgement (attributed to unknown Flemish painters) originally covered nearly the whole of the wall. Fascinatingly the central area of the fresco, featuring Christ presiding over the Last Judgment, was later removed in order to provide an entrance for another chapel?!

The main reason we have come to this part of France now, is to visit Albi Cathedral. We arrive in Albi early to enjoy the coolest part of the day before the blazing sunshine takes over and, having parked in the underground car park, we go and get some breakfast at a café by a fountain in the main square. After breakfast we are accosted by some French Communists who are distributing literature. One of them takes Julia on … what a chump?! Julia studied economics at university and is well versed in communist ideology as well as having a Master’s degree in theology. She patiently but eloquently explains to him that we are followers of Jesus (not Roman Catholics, who he has no time for) and that the only real way to change society for the better is to change the hearts of individuals through a living faith in Jesus Christ! He doesn’t quite know how to handle Julia … but we part on good terms!

Our plan is to look round the Cathedral and then visit the Toulouse Lautrec Museum which is situated next door in the old Bishop’s Palace. The Cathedral is amazing – even better than we had imagined it – and (with the aid of an excellent audio guide) we spend a good couple of hours exploring every nook and cranny. The commentary is fascinating. The English language version features an Irish person who sounds just like Henry Kelly … but what a lot of theological twaddle? Surely Roman Catholics don’t believe all this nonsense that ‘Henry’ is telling us they do? Certainly most of the Roman Catholic Christians we know personally are far more Bible based and Christ-centred and don’t subscribe to all this mumbo jumbo? After a couple of hours of listening to ‘Henry’s’ theological explanation of Roman Catholic beliefs we are not at all sure who are the biggest heretics – the Cathars or the Roman Catholics?

After our tour of the Cathedral we have lunch in one of the several restaurants by the Cathedral … and an excellent lunch it is! Suitably ‘fortified’ (do you see what I did there?) we then take ourselves off to the Toulouse Lautrec Museum. Toulouse Lautrec was born in Albi and after his death in 1901 his mother gave many of his paintings (the Paris Art Galleries seemingly didn’t want them) to the city of Albi who just happened to have the space (the old Bishop’s Palace) to house them. It is a wonderful exhibition and we enjoyed another hour or two wandering around the various rooms displaying his paintings and exhibitions detailing his life. We then enjoy a delightful walk through the Bishop’s Palace Gardens that border the River Tarn, before returning to our car for the drive home.

There is just time (says Julia) to fit in a another church on the way back to the car park. The church itself is not very special but it does have a delightful cloistered garden. This is obviously a place where young people gather during the day, and homeless people gather at night. There are lots of young couples sitting around in the sunshine. On the way out I spot a notice pinned to a wall in the covered porch by the entrance to the church. It is clearly the place where homeless people spend the night sheltering from the cold. The notice asks these homeless people to please not pee in the holy water trough, situated by the entrance to the church itself, because devout believers who come to pray usually wash their hands and faces in the said trough before going inside to pray! We are still laughing at this all the way home, even it was a somewhat down to earth end to an otherwise uplifting day!