Posted by jimandjuliabinney on December 31, 2012 in Uncategorized 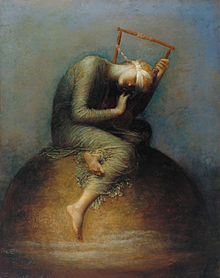 George Frederic Watts’ symbolist oil painting Hope shows a scantily clad female  figure (Hope herself) sitting on a globe, blindfolded, clutching a wooden lyre with only one string left intact. She sits in a hunched position, with her head leaning towards the instrument – perhaps so she can hear the faint music she can make with the sole remaining string – a single lonely star blinks hesitantly in the dark night sky.  The desolate atmosphere is emphasised by Watts’ soft brushwork, creating a misty, ethereal scene, in tones of green, brown and grey. A second version of the painting was painted by Watts in 1886, shortly after the death of his adopted daughter Blanche. This second version omits the star – Watts felt that it was too much a symbol of optimism?!  The first version is now held in a private collection, but the second version was presented to the Tate in 1897. It is said that two ladies were overheard discussing the painting one day. ‘Why do you think that it is called Hope?’ asked the one. Looking at the precariously placed figure on the globe, the other replied, ‘Probably because she hopes she won’t fall off!’

The English dictionary defines ‘hope’ as an ‘emotional state that promotes belief in a positive outcome related to events and circumstances in one’s life’. ‘Hope’ it would seem, is a psychological necessity if we are to envisage any kind of real future. Even if there are no rational grounds for it, we still continue to hope. I recall my father taking me to watch Brentford FC when I was about 9 or 10 years of age. I forget who Brentford were playing but with only two minutes of the game left they were losing 1-0. I do remember, however, a very optimistic Brentford supporter shouting out at this point in the game, ‘Come on Brentford! All we need is a goal, and a last minute penalty!’ The sad reality is that all too often ‘hope’ for us is actually transient and illusory. It is hope against hope. Hopeless hope. Fingers crossed, and hope for the best, kind of hope?!

In the New Testament, however, the word for ‘hope’ is very different. It is the Greek word ‘elpis’ signifying ‘a favourable and confident expectation regarding the future’ both in this life and in the life to come. It is this kind of ‘hope’ that the Apostle Paul refers to when he prays for the Christians at Rome (and for every other Christian down through time), ‘May the God of hope fill you with all joy and peace as you trust in him, so that you may overflow with hope by the power of the Holy Spirit’ (Romans 15:13). ‘Elpis’ literally means ‘guarantee’ which led Martin Luther, in his translation of Romans to refer to God here (in Romans 15:13) as ‘the God of the guarantee’.

We can feel confident about the future – whatever it may hold – because we can trust the God of hope, the God of the guarantee! He has a plan for our lives (Jeremiah 29:11), he has a purpose in life for each one of us (Ephesians 2:10), he has our best interests at heart (Romans 8:28) and he will fulfill all his promises to us in Christ (2 Corinthians 1:20). Indeed, as Paul tells us here, it is possible to be so confident about the future that we are ‘filled with joy and peace’ and actually ‘overflow with hope’ ourselves in such a way that it inspires others!

None of us know for certain what the future holds … but we do know who holds the future! Life is not random. The bible tells us that ‘our times are in God’s hands’ (Psalm 31:14,15) and we can be confident that God has a bright and purposeful future for us as we step out into another new year. I appreciate that lots of people today don’t find life easy, ourselves included. Julia and I have no money, we don’t have jobs, we don’t even live in our own home (we live with Julia’s mother in a cottage that belongs to her). I shall be 70 at the end of 2013. I don’t look it! I don’t feel it! And I am really excited about all that God has for Julia and myself in the next thrilling chapter of our lives as, God-willing, we return to some form of ministry together.

The secret, of course, is keeping our eyes firmly fixed on Jesus. In the Gospel Story (Matthew 14:22-33), when the Apostle Peter stepped out of the boat, and found himself walking on the water, he was fine as long as he kept his eyes on Jesus. It was only when he took his eyes off Jesus, and looked at the wind and the waves, that he begun to sink. To his credit, Peter actually did far more walking than sinking because when he began to sink Jesus was able to reach out and catch him. Peter had managed to get all the way from the boat to Jesus without sinking! And if we will keep our eyes on Jesus, we too will be able to walk on the water of our circumstances … however difficult they may seem! As the old poem suggests:

When we look within, we see failure and sin!
When we look around, troubles abound!
But when we look to Thee, the Lamb of Calvary
Hope, and peace, and joy are found!

← THE MOST TREMENDOUS TALE OF ALL
GOLD, CIRCUMSTANCE AND MUD →