Posted by jimandjuliabinney on October 30, 2012 in Uncategorized 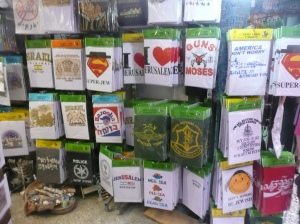 We land at Luton Airport at 1.00 a.m. Israeli time … 12.00 midnight UK time. We both put on jumpers and coats etc. before we disembark from the plane. The temperature has gone from hot and sunny and 33 degrees in Israel to cold and wet and 7 degrees here in the UK. It has been a pleasant flight and we have been well looked after by the flight crew. I have been critical of easyJet in the past but I have to admit that both outward bound and inward bound flights have been excellent.

I am not too sure about Luton Airport, however? We walk miles to the customs point and then to the baggage collection point, retrieve our cases, and then wait for ages in the freezing cold for the airport bus to take us to the car park so we can retrieve our little Corsa. It is still there, and it starts first time despite just standing there for a month in the cold and the wet. We plug in the SatNav so that we can find our way to our hotel. The SatNav has hardly any power left in it … and we can’t find the lead anywhere … we have just enough power for our SatNav to intermittently give us a vague sense that we are heading in the right direction.

We only manage to get as far as the exit to the car park, however, before we encounter problems. The car park barrier sensor doesn’t recognise our car and refuses to open automatically. Julia goes to the car park barrier machine to try and get some help. It is all gobbledegook … even our handful of Arabic and Hebrew words can’t help us … and we are in the UK anyway? Another car pulls up behind us and starts hooting us … it’s 1.00 a.m. and she is hooting us … it is a deserted car park and she is hooting us? The really annoying lady driver gets out of her car and marches over tutting all the time. She must work here and is in a hurry to get home. She pushes certain buttons for us and Julia eventually gets through to someone official who opens the barrier for us. The SatNav flickers dimly on and off but eventually we find our way back to the Premier Inn that we first stayed in a month ago the night before we left for Israel-Palestine. It is nearly 2.00 a.m. and there is a party going on in the foyer … the guy on duty obviously has all his mates in to keep him company?!

We stagger to our room and collapse on our bed. We realise, of course, that it is actually only 12 midnight because of the time zone change and the clocks going back an hour this weekend in the UK. We are still on Israeli time, however, and we are too tired to go to sleep straightaway but eventually we go to bed and fall into a deep sleep … only to be woken up again at 4.45 a.m. by an ‘alarm call’ … someone has booked an early morning call because he has an early flight, but its not us? We hope that whoever the call was meant for gets his plane in time? We eventually get back to sleep again and wake up late. Its o.k. though because we are booked in to the Beefeater Restaurant next door for breakfast … and they don’t stop serving breakfast until 11.00 a.m.

We like Beefeater breakfasts. You an eat as much as you like. I have a large bowl of fruit salad to start with, plus orange juice and coffee, and then a huge ‘Full English’ breakfast. I sit looking at it for a few moments because I really don’t know where to start? After four weeks of having virtually the same thing for breakfast – the Arabs are keen on various salad stuff – I am torn between the fried egg and the pork sausage and the bacon, none of which I have had for a whole month! The bacon wins!

While we are in the Beefeater Restaurant we find ourselves near a table where there are four young British-born Pakistanis discussing Islam. One of them is slightly older than the others and is obviously the teacher. They are listening intently to everything he has to say. We wonder if they are aware of the other side of Islam … the ‘dark side’ that stems from the later Median period rather than the earlier Meccan period in Mohammed’s life? We doubt it. Moslem propagandists tend to initially only talk about the softer side of Islam – the family values, the charitable works etc. – and leave the others side – the subjugation of women, the violence to non-Islamic believers, their declared political agenda to slowly but surely take over country by country – until later. We also wonder if a group of young Christian people would ever get together to discuss Christianity so deeply and intently in a restaurant somewhere in the same way. It also serves as a reminder to us of the relevancy of everything that we have learned during our time in Israel-Palestine.

La La Land is a fictional, nonphysical place where people out of touch with reality live and where nonsensical ideas come from. It is often used sarcastically pertaining to where one’s mind has gone. In many ways Israel-Palestine is La La Land. After a month living there attempting to get to grips with what is really happening, we return understanding the situation much better than we did before, but none the wiser as to how to resolve the situation. It is extremely complex … more complex than you would ever believe. Don’t believe anyone who tells you that the Jews are right, or the Palestinians are right, or even that the Zionists or evangelical Christians who advocate dispensational views are right … it is far more complicated than that?! Israel-Palestine really is La La Land … but then so is the UK. Even more sad, is the fact that so many evangelical Christians seem to be living in La La Land when it comes to understanding what is happening in ‘the Holy Land’ today?! Time for us evangelicals to read more widely, think more deeply, pray more fervently … and spout more cautiously, I suspect!

After a yumacious breakfast we load our car and drive home to Rodden. We stop for coffee at Fleet Services … after such a big breakfast we don’t really need any lunch … and Julia’s mother is preparing a nice evening meal for us to enjoy when we get back to Chipps Barton. We stop off at Southampton Services … and decide that we do need some lunch after all … so pig out on hamburgers and French fries?! We arrive home in good time to have a bit of a rest before dinner … and who should be there to greet us but Reggie Doggie! ‘At last you have come back!’ he barks … and wags his tail so enthusiastically that it almost falls off!

← Saturday 27 October: NEARER TO GOD IN THE GARDEN
TIME FOR A SABBATICAL? →