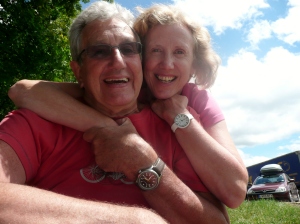 Things You May Need To Know About Us

We are both committed Christians and ordained Baptist Ministers to boot, thus enabling us to be part of that rare breed – a clergy couple! Theologically, I guess, we would be described as ‘radical evangelical’ although we prefer to be simply known as ‘Christian’. We both trained at Spurgeon’s College, London – Jim, as a full-time Ministerial student, from 1965-69 and Julia, as a Minister in Training, from 1999-2002. Jim comes from a background in engineering, and Julia from a background in economics (she has a BA degree in Economics from Essex University), and catering (she has a Post Graduate Diploma in Hotel and Catering Management from St Mary’s College, Edinburgh). We have both continued to study since our initial training and Jim has a BA degree in Theology (CNAA), and an MTh in Applied Theology, and an MPhil in Divinity (both from the University of Wales), and Julia an MTh in Preaching (also from the University of Wales). We have been happily married for 27 years. This is Jim’s second marriage and he has two grown up, married children, from his first marriage, and four grandchildren. After a several successful pastorates Jim ‘retired’ from active ministry in 2010 when Julia was forced to stand down from the pastorate as a result of chronic fatigue. After a period of ‘leave of absence’ from the Baptist Ministry (during which we enjoyed living in an idyllic rural retreat in Dorset), Julia has made an excellent recovery and in 2015 accepted an invitation to become the Pastor of the Baptist Church in Knaphill, an ‘urban village’ on the outskirts of Woking in Surrey, where we both now live seeking to serve God in the local church and community. Jim was appointed as Community Minister at Knaphill Baptist Church in 2016 with a remit to head up the church’s outreach programme into the local community. He is also the Network Pastor for the North Downs Network of the South Eastern Baptist Association of the Baptist Union of Great Britain with responsibility for caring pastorally for the ministers of the 20 or so churches in the Network. Until quite recently both Julia and Jim were both members of the national Baptist Ministers’ Fellowship Committee, and Jim wrote a regular column for the Baptist Ministers’ Journal. We have also both been On-Line Tutors for Spurgeon’s College, Julia specialising in ‘Preaching’ and Jim in the ‘Doctrine of the Holy Spirit’ and ‘Mission’.  We are currently both studying for doctorates at the University of Winchester. Julia is a great cook, and Jim is great at eating … and washing up. Apart from being ‘foodies’, amongst our shared interests are reading, walking, history, stately homes, foreign holidays, camping, writing, sport, art … and meeting people! You can find out more about us from our Profiles (see the link above) and you can also find both of us, individually, on Facebook and Twitter if you want even more up-to-date news.

Things We Have Said About Each Other

Jim about Julia: Julia is my soul mate as well as my wife and my partner in ministry. She is gorgeous, extremely intelligent, and has a great personality. She is real fun to be with, and we spend a lot of our time laughing at all sorts of things. She is a wonderful person to be sharing the ministry with. She thinks very deeply about things, is a very prayerful person, a great preacher and communicator, an inspirational worship leader, and a compassionate and caring pastor. She is my best friend and always tremendously supportive even when she is putting me right about things. Most amazing of all is that she still loves me even after having been married for 27 years.

Julia about Jim:  Jim is a ‘one off’! Someone once described him as being ‘like Marmite – people either love him or hate him’.  Obviously I am in the former camp. He is an extraordinary gifted person: a prophet, a visionary, a strategic thinker – always at least one step ahead of the rest of us (which some find difficult) – a powerful and effective communicator, immensely caring and compassionate to those inside the church and particularly to those outside it. Yet he has feet of clay. Despite this, and several major setbacks in his life, he has never wavered in his commitment to the Lord and his will. He is an inspirational person – after Jesus, he is my inspiration.

Things People Have Said About Us

Jim Binney is a senior and experienced minister who has exercised his ministry diligently and effectively in a variety of contexts over a long career. He has both an ability to adapt to circumstance and a firm and well-grounded understanding of the pastoral office with particular strengths in all the main pastoral virtues: preaching, teaching, pastoral care and the ‘cure of souls’ in general. In addition he has maintained his discipline as a scholar, a fact that is reflected in his qualifications and should be evident on his CV. As an experienced minister he has little to prove and much to offer and is well-placed to give of his best in a pastoral context. (Rev Dr Nigel Wright, former Principal, Spurgeon’s College, London)

Julia Binney is a strong and creative communicator with the capacity to make a lasting impact upon a church and community. She is highly intelligent, bright in personality as well as intellect, self-motivating and self-starting, well-organised, and appropriately forthright when the moment requires it. She will bring clarity of mind and purpose to a church and will show herself to have considerable capacity to relate to people of all ages with warmth, interest and compassion. (Rev Dr Nigel Wright, former Principal, Spurgeon’s College, London)

Two of the loveliest, most authentic people I have been blessed to know. (Serena Newman, former member and Deacon, Beckenham Baptist Church)

In 1963, as a very shy new Christian I start hanging out with the young people at Greenford Baptist Church. Enter Jim – tall, dark, slim, babe-magnet, seemingly permanently attached to huge floppy chain-reference Bible – and already a passionate communicator of the Word of God. Some months later, after my first effort at giving a talk to this bunch of people, he is the first to come up with a word of encouragement: ‘That was actually quite good, Steve … though maybe one hour was a bit too long!’ Four years down the line I follow him into Spurgeon’s College, getting many, many generous offers of lifts to and from South Norwood in his well-worn Ford Anglia, and learning the First Binney Rule of the Road: ‘They won’t hit me … their paintwork costs more than mine.’ Thanks, Jim. (Rev Steve Weatherly-Barton, Minister, Gosberton Baptist Church, Lincolnshire)

We first met at FortRocky, not sure what year that was. Our paths have crossed in many different ways over the years, some in a serious way, some not so serious. You are a very inspirational couple and I am so pleased to count you as friends, and trust that we shall be for many years to come. (Pat Couchman, Dunnington Baptist Church)

Jim – someone who must bear some of the blame for my now being Reverend and not just a Mrs! Julia – his brilliant accomplice! (Rev Carolyn Urwin, Minister, Wraysbury Baptist Church)

Who are they? They are a very special … couple!!!!! (Joan MacLennan, member, Beckenham Baptist Church)

My husband and I were impressed and attracted to the church in Beckenham by Jim’s openness, and willingness to go where God was leading. Also to give others a chance to use their gifts, whatever. And Julia was a whizz with the multi-media, or was that both of you? Anyway it was helpful, and I liked the ‘blended worship’ side of things too – opening our minds to new ways of worship, while still being grounded and Biblical. And Julia’s way of taking our daughter’s wedding was an eye-opener to the many non-believers who attended – in a good way, of course! (Kay Hawkins, member, Beckenham Baptist Church)

Our family was blessed by Julia’s ministry – she baptised our son and preached at our daughter’s wedding. She and Jim together constructed and conducted beautiful, meaningful, powerful and prayerful services (and speaking for myself, I still miss them terribly). (Helen Aylward, former member, Beckenham Baptist Church)

Julia, just to say a very sincere thank you for the most beautiful and meaningful Good Friday Communion service that I have ever attended. You captured the heart and allowed time to reflect on each of Jesus’ Seven Sayings from the Cross. A very thoughtful service prayerfully and sensitively delivered. Personally, I was able to be there at the Cross with an open heart. Thank you so much. (Jill Cleveland, Member, Dorchester Baptist Church)

We praise God for the healing He has brought about during the last few years, for the time He gave you for peaceful preparation, for your undiminished faith whilst you were waiting and, perhaps, experiencing disappointment, and for opening a window of opportunity for your ministry to continue overtly. We know that the congregation of Knaphill Baptist Church are in for a treat, with many blessings, sound and loving ministry … and lots of laughs! (Tim Lewis, Anglican Diocese of Cyprus and the Gulf)

Hi Julia, just wanted to say how blessed I was this morning, along with all those I was able to speak to. The presence of God in the power of the Spirit was almost tangible. I am sure you and Jim are the ‘special ones’ from God to our Fellowship. I pray we may be a blessing to you as you are to us. In his wonderful Name. (Margaret Stout, Member, Knaphill Baptist Church)

3 comments on “About Us”