Posted by jimandjuliabinney on March 19, 2016 in Uncategorized 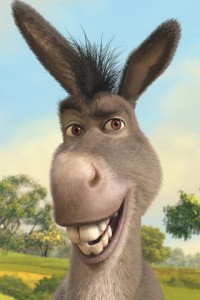 Some years ago I knew a Baptist Minister who had been the Minister of his church for well over 20 years. He told me, just before Palm Sunday one year (facetiously I hope) that he had preached so many ‘Palm Sunday Sermons’ over the years that he had finally run out of ‘original things’ to say on Palm Sunday … so this year he was reduced to preaching on the subject of ‘Jesus … from the donkey’s point of view’.

The donkey is, of course, one of the two central characters in the ‘Palm Sunday Story’ (the other being Jesus). Palm Sunday falls on the Sunday before Easter and commemorates Jesus’ triumphal entry into Jerusalem, an event mentioned in each of the four Gospels (Matthew 21:1-11, Mark 11:1-11, Luke 19:28-44 John 12:12-19). According to the Gospels, Jesus rode a donkey into Jerusalem, and the celebrating people there laid down their cloaks and small branches of palm trees in front of him, and sang part of Psalm 118: ‘Blessed is he who comes in the name of the Lord’. It is suggested that this was a ‘prophetic enactment’ fulfilling the words of the Prophet Zechariah: ‘See, your king comes to you, righteous and victorious, lowly and riding on a donkey, on a colt, the foal of a donkey’ (Zechariah 9:9). In this way Jesus openly declared that he was indeed the promised Messiah, and forced the Jewish Sanhedrin to ‘show their hand’ so to speak.

The story itself is full of incident and significance and leaves us with much to ponder. Reading it once again this year, however, I was reminded of a poem that we were forced to learn at school as children. I did not appreciate poetry that much in those days, and it is only in later life that I have come to enjoy poetry, and even write the odd poem or six myself. I certainly did not appreciate, or understand the meaning behind, this particular poem. It was C K Chesterton’s poem, The Donkey:

When fishes flew and forests walked
And figs grew upon thorn,
Some moment when the moon was blood
Then surely I was born.

With monstrous head and sickening cry
And ears like errant wings,
The devil’s walking parody
On all four-footed things.

The tattered outlaw of the earth,
Of ancient crooked will;
Starve, scourge, deride me: I am dumb,
I keep my secret still.

Fools! For I also had my hour;
One far fierce hour and sweet:
There was a shout about my ears,
And palms before my feet.

The poem itself is, of course, Chesterton’s ‘take’ on those events that first ‘Palm Sunday’ – ‘Jesus … from the donkey’s point of view’, if you like. Gilbert Keith Chesterton, better known as G. K. Chesterton, was an English writer, lay theologian, poet, philosopher, dramatist, journalist, orator, literary and art critic, biographer, and Christian apologist. He is often referred to as the ‘prince of paradox’ and it has been suggested that ‘Whenever possible Chesterton made his points with popular sayings, proverbs, allegories – first carefully turning them inside out.’

Chesterton’s poem The Donkey is a classic of reversed perspectives – ‘unexpected prophecy in the mouth of a donkey … highly suitable for celebrating Palm Sunday, the festival of the king who rides humbly on an ass, rather than on a war horse like the Roman conquerors’ as Janet Morely puts it in her excellent book, The Heart’s Time – a series of mediations on various poems for Lent and Easter. The whole poem is written with the donkey as the narrator and never really moves beyond that perspective. A lot is implied about the Person the donkey is carrying although Jesus is never actually mentioned by name? The reader is expected to be familiar with the Palm Sunday story and therefore able to ‘fill in the gaps’ or ‘join up the dots’ so to speak. The ability to do this would have been much more common in Chesterton’s day than today, although hopefully the poem itself is intriguing enough to make the reader who is ignorant of the Palm Sunday story delve deeper into the background of the poem. But even for those of us who are familiar with the Palm Sunday story there is much here to make us think more deeply and radically about the significance of the events on that unique day 2,000 years ago. Those of us who are familiar with the Bible are perhaps reminded of another donkey that spoke in the Bible – Balaam’s ass (Numbers 22) who saw and responded to an angel while his master remained oblivious?

Time does not permit us to unpack every nuance that Chesterton finds in the events of that first Palm Sunday, and subsequently expresses through the words of the donkey. I would suggest that getting hold of Janet Morely’s little book (mentioned above) would be a worthwhile investment – not only for her penetrating observations on this particular poem, but also on several other poems with biblical and theological connotations. There is, however, one particular aspect that seems to stand out for me – one that is well worth sharing. It has to do with the fact that God can use even that which has a self-esteem that is so low that it is several degrees sub-zero, that which everyone and everything else completely dismisses as ugly, ludicrous, useless, unimportant, and so on and so forth!

Throughout the poem the donkey constantly refers to itself as seen to be ‘monstrous’, ‘the devil’s walking parody’, etc., and sees itself not only as mocked, derided, and dismissed by society in general but also by the donkey itself. However, it has a ‘secret’ that it largely keeps to itself. It had its ‘hour’, its moment in the sun, if you like. There was a day, a time, when Jesus himself, chose the donkey. The One who was ‘King of kings and Lord of lords’ (Revelation 19:6) chose to ride on a humble donkey, into the streets of Jerusalem, in declaration of who he truly was. And in that moment the humbly donkey – dismissed by the majority and full of self-loathing – was elevated to a position way above anything that it had previously considered possible in the extreme! No wonder the donkey – now full of the kind of confidence and rightful self-esteem that comes from knowing that God can use even the humblest of creatures – considers those who are so dismissive of him ‘Fools’ who know nothing of the way God works, time and again. Using a poor widow woman with two copper coins (Luke 21:2-4), or a small boy with a few loaves and fishes (John 6:1-14), rather than rich men with bags of gold or ‘grow ups’ who keep their ‘food’ for themselves? As the Apostle Paul tells the Corinthian Christians: ‘God deliberately chose men and women that society overlooks and exploits and abuses … chose “nobodies”’(1 Corinthians 1:27) in order to fulfil his great plans and purposes for the world!

Gladys Aylward (1902-1970) was a British evangelical Christian missionary to China, whose story was told in the book The Small Woman, by Alan Burgess, published in 1957, and made into the film The Inn of the Sixth Happiness, starring Ingrid Bergman, in 1958. Born to a working-class family in Edmonton, North London, she worked as a housemaid at an early age but always had an ambition to go overseas as a missionary and studied with great determination to be fitted for the role, only to be turned down because her academic background was inadequate, and the China Inland Mission to which she applied was convinced that it was not possible to learn the language at her age. In 1932, completely ‘off her own back’, she spent her life savings on a train passage to Yangcheng, Shanxi Province, China. The perilous trip took her across Siberia with the Trans-Siberian Railway, where she was forced to get off the train she was on and walk to her destination … and ‘the rest’, as they say, ‘is history’! So … if you think that you are useless, that you have nothing much to offer, that everybody else dismisses you, that you actually don’t even think much of yourself …be encouraged! You may very well be just the person God is looking for … right here, right now!