Posted by jimandjuliabinney on January 6, 2015 in Uncategorized 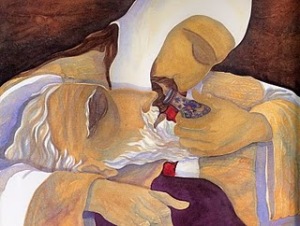 Artaban and the Old Jewish Man

Today is Epiphany (which comes from the New Testament Greek word epiphaneia meaning ‘manifestation’ or ‘striking appearance’), a Christian Feast Day that celebrates the revelation of God the Son, as a human being, in the Person of Jesus Christ. In Western Christianity, the feast commemorates principally (but not solely) the visit of the Magi or Wise Men to the Christ child, and thus Jesus’ physical manifestation or revelation to the Gentiles. Thus we see that the Good News of the Gospel is not just for Jews but for everyone, particularly all those who will see in Jesus, God’s Promised Messiah, the Saviour of the World!

The Gospel Story tells us that ‘After Jesus was born in Bethlehem in Judea, during the time of King Herod, Magi (or Wise Men) from the East came to Jerusalem and asked, “Where is the One who has been born King of the Jews? We saw his star in the east and have come to worship him.” When King Herod heard this he was disturbed, and all Jerusalem with him. He called together all the people’s chief priests and teachers of the law, and asked them where the Christ was to be born. “In Bethlehem in Judea,” they replied, “for this is what the prophet has written: But you, Bethlehem, in the land of Judah, are by no means least among the rulers of Judah; for out of you will come a ruler who will be the shepherd of my people Israel.” Then Herod called the Magi secretly and found out from them the exact time the star had appeared. He sent them to Bethlehem and said, “Go and make a careful search for the child. As soon as you find him, report to me, so that I too may go and worship him.” After they had heard the king, they went on their way, and the star they had seen in the east went ahead of them until it stopped over the place where the child was. When they saw the star, they were overjoyed. On coming to the house, they saw the child with his mother Mary, and they bowed down and worshiped him. Then they opened their treasures and presented him with gifts of gold and of frankincense and of myrrh. And having been warned in a dream not to go back to Herod, they returned to their country by another route’ (Matthew 2:1-12)

After Jesus was born, ‘Wise Men’ came to look for him, probably from an area which is now in either Iraq, Iran, Saudi Arabia or the Yemen. Although they are often called the ‘Three Kings’, the Bible does not say that they were ‘Kings’ or how many there were? Three is only a guess because they brought with them three gifts. They were definitely men of great learning. The word ‘Magi’ comes from the Greek word magos (where our English word ‘magic’ comes from). Magos itself comes from the old Persian word Magupati which was the title given to priests in a sect of the ancient Persian religions such as Zoroastrianism. Today we would called them ‘astrologers’. Back then astronomy and astrology were considered part of the same overall ‘science’ and went hand in hand with each other. The Magi would have followed the patterns of the stars religiously. They would have also probably been very rich and held high esteem in their own society and by people who were not from their country or religion. They had seen an unusual new star in the sky, and knew that it told of the birth of a special king. No one really knows what the new star is the sky was, and there are many theories including comets, supernovas, a conjunctions of planets or even something supernatural? According to legend their names were Melchior, the King of Arabia, who presented the gift of gold to Jesus; Gaspar (or Caspar), the King of Sheba, who presented the gift of frankincense to Jesus; and Balthazar, the King of Egypt, who presented the gift of myrrh to Jesus.

There is a legend, however, that there was a ‘Fourth Wise Man’, whose name was Artaban. Artaban was a Persian King whose study of the planets and the stars led him to predict the birth of the King of kings. It is said that he sold everything he possessed and purchased ‘a large sapphire blue as a fragment of the night sky, a flawless ruby redder than a ray of sunrise, and a lustrous pearl as pure as the peak of a snow mountain at twilight’ which he intended to carry as tribute to this King of kings. He then set out for Jerusalem, where he had arranged to meet up with the three other Wise Men, or Magi, to find this newborn King.

According to the legend, after many weeks of difficult travel and frustrating delays, he came across an old Jewish man lying in the road, suffering from a deadly fever, begging for help. Artaban hesitated. If he stopped to minister to a dying stranger he could miss his three friends, but if he left now, the man would surely die. He stayed with the sick man, caring for him and nursing him back to health, leaving with him all that he had left of bread and wine, and his store of healing herbs. ‘I have nothing to give you in return,’ said the grateful man, ‘only this – our prophets foretold that the Messiah will be born in Bethlehem, not in Jerusalem. May the Lord bring you in safety to that place, because you had pity upon the sick!’

When Artaban reached the place where he was to meet Melchior, Gaspar and Balthazar, he discovered that they had already left. There was a message for him: ‘We can delay no longer. Follow us across the desert.’ Artaban returned to Babylon, sold the sapphire, and bought a train of camels, and provisions for the journey. He arrived at Bethlehem with his remaining ruby and pearl offerings, but it was three whole days after the three other wise men had found Mary, Joseph and Jesus, and had laid gifts of gold, frankincense and myrrh at the Child-King’s feet.

In a small house, Artaban met a woman with her baby son, who told him Joseph had taken his wife and child and fled secretly that very night. King Herod was killing all the male children, afraid the promised ‘King’ would claim his throne. As she spoke, there was uproar in the streets as Herod’s soldiers searched each home to kill any male children they found. The terrified young mother fearful for the fate of her own child, begged Artaban for help. Artaban rushed to the doorway and held out the ruby to the soldier, who snatched it eagerly. ‘March on!’ he commanded his men, ‘there is no child here!’ Artaban sighed: ‘Now two of my gifts are gone. I have given to mankind that which was meant for God. Shall I ever be worthy to see the face of the King?’ But the woman, weeping for joy, said gently: ‘Because you have saved the life of my little one, may the Lord bless you and keep you and give you peace!’

It is said that Artaban wandered for 33 years in search of the family from Bethlehem. Worn and weary, now ill and ready to die, but still looking for the King, he came for the last time to Jerusalem. Hearing of a great person who was to be put to death that very day, and hearing of his life and teachings, Artaban realised this was indeed his ‘King’. As he made his way to Golgotha, hoping his ‘pearl of great price’ could buy the King of kings release, he came across a troop of soldiers marching down the street, dragging a young girl in chains. As they passed by she cried out to Artaban: ‘Have pity on me; save me! My father is in debt and I am to be sold as a slave to pay the debt?’ The Fourth Wise Man knew immediately what he must do. He took the pearl from his breast – and never had it seemed so luminous and radiant as it was now – and exchanged it for the girl’s freedom!

According to the legend no sooner had Artaban paid off the debt and secured the girl’s release than things went from bad to worse for Artaban. Not only had he now given away the three priceless gifts he had originally bought for the King of kings, but suddenly the skies went unnaturally dark, and a violent earthquake shook the city. A flying tile hit Artaban on the head and fatally wounded him. He sank half-conscious to the ground, and as the girl pillowed his head in her lap, his lips began to move. Addressing someone who only he could see, Artaban was heard to say: ‘It cannot be so, Lord. When did I see you hungry and feed you? Or thirsty and gave you something to drink? When did you come as a stranger to my door, and I welcomed you in? When did you come to me naked, and I clothed you? When did I see you sick or in prison, and visited you? For 33 years I have looked for you, but I have never seen your face nor ministered to you, my King!’ And then, according to the legend, ‘like a whisper from very far away came a low sweet voice: “Truly I say to you, in as much as you have done these things for the least of my brothers and sisters, you have done all these things for me!”’ And then, at the last, Artaban smiled in death because he knew that the King had indeed received the gifts he had brought for him!