Posted by jimandjuliabinney on November 27, 2012 in Uncategorized 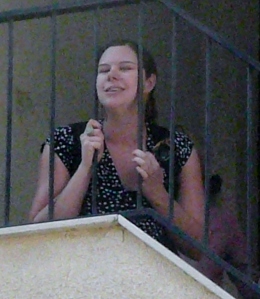 There is a rather poignant Fred Craddock story about a church in interregnum interviewing a prospective Minister, that goes something like this: The chair of the church’s Search Committee said to the minister being interviewed, ‘You preached a really good sermon … as good a sermon as we’ve heard in this church for a long time. You’ve answered all the questions we have put to you really well.  Your theology and your biblical knowledge are really good, and your references are excellent … but we don’t just feel like you’re the one for our church just now!’ ‘Oh! she said.

With all the discussion in the media at present about ‘Women’s Ministry’ (following the failure of the Synod of the Church of England to appoint Women Bishops despite an overwhelming majority in favour), I find myself thinking about it once again as I reflect on the various lessons learned during our time on sabbatical in Israel-Palestine recently. We had a wonderful time, and met some really wonderful people who hopefully will remain life-long friends … but clearly the fact that Julia was an ordained and accredited Baptist Minister, used to exercising a leadership role and a regular preaching-teaching role in the church, was a problem in a culture where women are expected to play a somewhat subsidiary role to men. Nothing was specifically said to us about this, although it was suggested early on in our stay that it was not advisable for us to let slip ‘certain things’ … such as the fact that my first marriage had ended in divorce (albeit 25 years ago) and that Julia was a Pastor used to exercising a primary leadership/preaching/teaching role in the church. Both these matters were absolute taboo for both Evangelical Christian Arabs and Messianic Jews. I suspect even some of the members of staff at the Nazareth Evangelical Theological Seminary struggled with these facts about us as well, although they were too kind to actually say anything to us, and Julia was invited to ‘lead devotions’ one morning (which she did very well by the way, and what she had to say touched a number of lives). In this particular blog I want to concentrate on ‘Women’s Ministry’ and leave the question of ‘divorce and ‘remarriage’ to another day.

Following the somewhat embarrassing debacle for the Established Church, it has been good to see so many Baptist-Christians supporting the appointment of women as bishops in the Church of England.  But before we Baptist-Christians get too carried away with how good we are in this, we need to recognise how far behind the Church of England we are when it actually comes down to the recognition of Women’s Ministry?! I am reliably informed that 33% of clergy in the Church of England are women, whereas only 10% of Baptist ‘clergy’ in the UK are women. And although we have appointed a number of women as ‘suffragan bishops’ in our Baptist Associations, we have only ever appointed two actual woman ‘bishops’?! And, if Julia’s experience of the Baptist Settlement Process is anything to go by … for a female candidate to even get to the stage where she is actually interviewed with a view to the pastorate by a church ‘search committee’ is proving difficult (despite the sterling efforts of our Regional Ministers, our ‘Baptist Bishops’).

I have long been an advocate of Women’s Ministry, but our time in Israel-Palestine witnessing first hand the way in which the place of women is relegated to a subsidiary role in the Church (not just in Islam) – essentially for very backward looking cultural reasons – underlined and affirmed this for me. On returning to the UK I stumbled across Derek and Dianne Tidball’s book (published just this year by IVP), The Message of Women, Reading this helped me to clarify my thinking considerably, not least because I myself have been on a similar journey to Derek who writes very movingly at one point of having ‘come over many years to change position through the reading of Scripture and observation of what God is doing in his church’. Much of what I suggest in the next couple of paragraphs is gleaned from this excellent book.

For me, whether or not women can exercise leadership/teaching roles in the Church essentially revolves (in microcosm) around our understanding of Paul’s teaching in his Letter to the Galatians, when he suggests that in Christ ‘There is no longer Jew or Gentile, slave or free, male or female … for you are all one in Christ Jesus’ (Galatians 3:28). There are two words that are often used to identify two broad perspectives in approaching the role of women in the Bible: complementarians and egalitarians.

Complementarians argue that while men and women are of equal worth and enjoy equal status before God, they were created to fulfil different roles and functions, in other words to complement each other. God made the man to be head of the woman in the family, in the Church (some also say in society as well) and this leads them to have different functions, inherent in Creation. Men alone then should be leader-teachers in the Church, and women learners and active in other ways. It is also often suggested that thus, men should be breadwinners and women homemakers in the family.

Egalitarians affirm that while there are obvious distinctions between men and women (not least biologically) they enjoy full equality before God in Christ. This is not just an equality of spiritual status but also an equality of function. Women, therefore, should not be confined to a domestic role or denied positions of leadership, teaching or authority in the Church. Consigning men and women to different roles in Church or society on gender differences is the result of the Fall and the resulting curse, and essentially socially constructed rather than inherent in Creation. Jesus Christ inaugurated a new age and a new community in which the effects of the Fall are both challenged and overcome. The full reversal may await the Second Coming of Christ, but the Church is called to tread that road now!

My personal conviction is that the egalitarian position is the correct one. Like Derek Tidball I have come to this position over a number of years through the reading of Scripture and observation of what God is doing in his church, not least in the clear way he has chosen to bless the ministry of many women pastors, preachers and teachers, and grow his church numerically and spiritually through their ministry. Of course God has always used women in a significant way, and continues to do so today.

There is a line of women, extending back to Eve,
Whose role in shaping history God only could conceive.
And though, through endless ages, their witness was repressed,
God valued and encouraged them through whom the world was blessed.

There is a line of women who took on powerful men,
Defying laws and scruples to let life live again.
And though, despite their triumph, their stories stayed untold
God kept their number growing, creative, strong and bold.

There is a line of women who stood by Jesus’ side,
Who housed him while he ministered and held him when he died.
And though they claimed he’d risen their news was deemed suspect
Till Jesus stood among them, his womanly elect.

There is a line of women continued down through time
Continuing to persevere in living for their Lord
And though the church moves slowly, and trips over its feet
Yet still they keep on trusting God’s call upon their lives.

So sing a song for Edith [Gates]* who pioneered the way
And sing a song of others who do the same today
And sing of all the women who strive to do their best
As people called to serve God in every time and place.

*Edith Gates was the first woman ordained a Baptist minister in England in the 20th Century, back in 1929, and along with a Congregationalist of roughly the same date, one of the first two in any tradition in the UK.

← STUCK ON THE CIRCLE LINE?
NO ROOM AT THE INN →